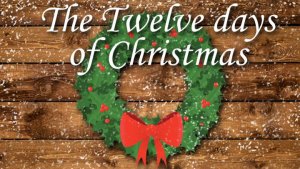 On the first day of Christmas Scarecrow gave to me a Partridge in a pear Tree – Did you know there are many different types of Partridge? 43 in total actually! They are medium sized birds and are native to Europe, Asia, Africa and the Middle East. They have a diet consisting of seeds, grapes and insects. The most famous reference to the Partridge is actually this Christmas song, but it is technically a lie, as they are unlikely to be seen in a pear tree, due to being ground nesting birds.

On the second day of Christmas Scarecrow gave to me Two Turtle Doves – What Birds are the hardest to disperse with a distress call? Doves and Pigeons! This is due to their natural reaction when hearing their distress call; they look to perch higher than the apparent threat (point of broadcast) to observe the threat before taking any appropriate action. They are incredibly intelligent animals; but don’t worry, Scarecrow has a way of dispersing this cleaver bird!

On the third day of Christmas Scarecrow gave to me Three French Hens – Did you know there are more chickens in the world than any other bird? Chickens are social, inquisitive, intelligent birds and many people find their behaviour entertaining. Even certain breeds such as Silkies, and bantam varieties, are generally recommended as good pets!

On the fourth day of Christmas Scarecrow gave to me Four Calling Birds –  Instead of Scarecrow giving you 4 calling birds, we would be happy to help disperse your calling birds. The term calling birds originates from “colly birds”, colly meaning black as coal which most likely refers to Blackbirds. Lucky for you Scarecrow has a distress call to solve such a problem and disperse those noisy calling birds.

On the fifth day of Christmas Scarecrow gave to me Five Golden Rings – To most people five rings would highlight the Olympic Rings, and Scarecrow were delighted to have supplied dispersal systems to be installed in the Olympic Village in London 2012. However, tales tell that the gold rings are not in fact pieces of jewellery as the literal meaning would have you believe, but refer to ring-necked birds. These are most likely to be Common Ring-necked Pheasants which were introduced to England from China in medieval times, and were a popular game bird to be eaten.

On the sixth day of Christmas Scarecrow gave to me Six Geese a Laying – Got a problem with Geese? That’s no problem for Scarecrow! All of our systems are reprogrammable; if your Goose call is not a standard call we can remove a call you don’t need, and replace it with one you do need. Scarecrow currently has calls for the Greylag Goose, Barnacle Goose, Greater white fronted Goose and 4 variants of Canada Goose… No more Geese laying at your site!

On the seventh day of Christmas Scarecrow gave to me Seven Swans a Swimming – Did you hear the story of the Swan that landed on Heathrow’s Runway? It’s said that the Swan had landed on the runway due to the light reflection making it look like water. This Swan got so tired it could not take off again and took a team of the airports Bird Hazard Management team to remove it safely. Birds can present a safety risk at airport, which is why Scarecrow has a range of Airside products to help disperse birds safely, decreasing the risks of Bird strikes!

On the eighth day of Christmas Scarecrow gave to me Eight Maids a Milking – Well actually Scarecrow cannot disperse Cows, or milk them… however they can help farmers all over the world from reducing financial loss. Scarecrow has many products that are used in the Agricultural Market to reduce crop damage; our handheld Patrol Two, 180/360 system, and BIRD System with externally mounted speakers.

On the ninth day of Christmas Scarecrow gave to me Nine Ladies Dancing – Many birds perform dances, particularly during courtship rituals! Albatrosses mate for life and are incredibly faithful; but before deciding on a partner, which can take up to 15 years, they will dance with several partners. Once they have made their choice they will stick faithfully with their mate until one of them dies, which might not be for another fifty years. Keep waiting ladies…your Albatross is out there somewhere!

On the tenth day of Christmas Scarecrow gave to me Ten Lords a Leaping – I’ll bet you didn’t think birds could leap? well the Grey Heron can, to take flight a heron must leap into the air! These birds are tall with long legs, a long beak and grey, black and white feathering.

On the eleventh day of Christmas Scarecrow gave to me Eleven Pipers Piping – Sandpipers make a distinctive three-note piping-like call as they fly off. It is a smallish bird with brown upperparts and white under parts. Sandpipers habitually bob up and down, known as ‘teetering’, and they have a distinctive flight with stiff, bowed wings.

On the twelfth day of Christmas Scarecrow gave to me Twelve Drummers Drumming – We think the best contender for the drummer is the great-spotted woodpecker. They spend most of their time clinging to the side of tree trunks and branches trying to hide from observers and predators although they will venture into gardens to feed at bird tables and feeders. The presence of a great-spotted woodpecker is often announced by its loud call or by its distinctive spring ‘drumming’ display.

Merry Christmas and a Happy New Year from the staff here at Scarecrow. We wish you good health and happiness for 2020