In April 2019, the former MOD St Athan airfield became a civilian airport after it was taken over by the Welsh Government and Cardiff Airport.

Part of the significant takeover process included the wildlife control proposition and steps were taken to bring St Athan in line with the protocols operated at Cardiff Airport, hence the acquisition of Scarecrow B.I.R.D Tab. Following the purchase, Scarecrow Director David Randell delivered training in the use of the system to the firemen stationed at the airport, as it is currently their responsibility for undertaking the regular wildlife patrols.

The simplicity of use of the system when out on patrol enabled training of two different teams over 2 days, and the guys quickly grasped the core functionality, and the use of the software is set to save them considerable time when compared to the previous completion of paper records. 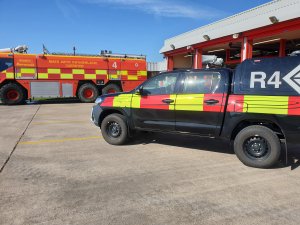