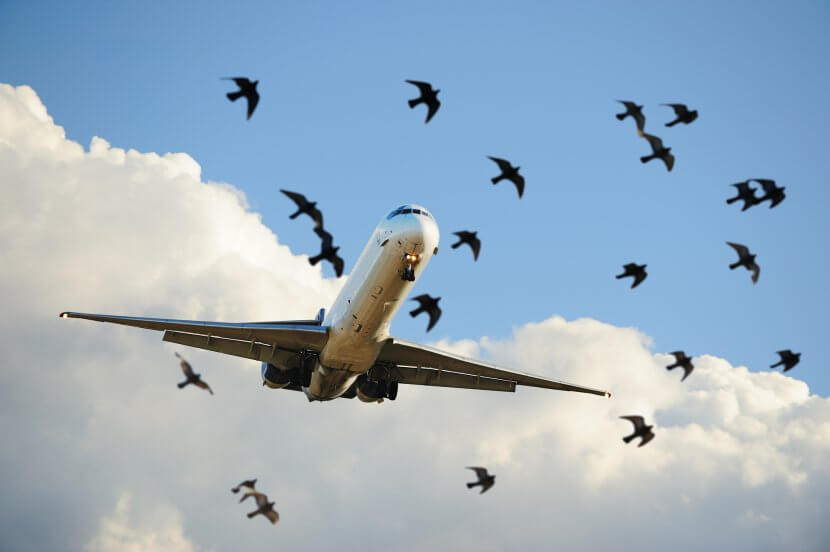 We all know about the potential dangers of a bird strike on an airplane, but many people have understandably questioned why it is that such a situation is so serious. After all, a bird is pretty small and a plane is the size of, well, a plane. How come so much potential danger can arise if the two manage to find each other in mid-air? Before anything else, however, we need to ascertain exactly what constitutes a bird strike.

If a bird comes into contact with a plane at any time, it’s listed as a bird strike. There are many incidents, however, in which little or no danger is likely to happen. Serious problems can occur on larger planes when a bird or a flock of birds come into contact with the engines or with the landing gear. This is the more harmful scenario we hear about when people discuss major bird strike incidents on the news, for example.

Needless to say, the damage to the general plane’s body, windows or wings will also depend on the size of the aircraft. Smaller planes can suffer a great deal of structural damage even from a single bird, in part because the incident will have been exacerbated by the speed of the aircraft at the time. And to a lesser extent the speed of the birds can also play a part in the damage that ensues.

Airports, both civil and military, are doing more and more these days to minimise the risk of a bird strike, and it’s easy to see why.

The worst case scenario for a collision between a large plane and a group of birds would be when one or more birds are sucked into the engine. The fan blades within can become damaged by the bird itself, and this could potentially lead to an engine malfunction, possibly resulting in a crucial loss of thrust.

The so-called Miracle on the Hudson, a celebrated emergency landing of a plane on New York’s Hudson River in 2009, came after an engine on Flight 1549 came into contact with a flock of Canada geese.

And away from the engine itself, severe damage can be caused to a plane’s landing gear, in particular of course when this equipment is exposed during a landing or take-off. Directional control problems can occur, as well as issues with the brakes and the nose gear steering systems. To avoid risks altogether is almost impossible in airports, but there are steps that can be taken to at least significantly minimise the dangers in the first place.

Here at Scarecrow, we’ve been providing airport bird deterrent systems for many years, and we continue to work alongside facilities all over the world to help disperse and remove birds from potentially dangerous locations with effective bird control methods.  We offer the latest state of the art products for identification, monitoring, and humane dispersal, making airports far safer for passengers and staff members. A growing number of the world’s busiest airports are turning to Scarecrow products in a bid to manage bird problems and reduce the risk of potential disasters.

Airport managers in all parts of the world are doing more and more to reduce the risk of bird strikes, while at the same time dispersing birds in a safe and humane manner. State of the art monitoring equipment from Scarecrow has given airside teams the opportunity to understand more about bird movements and habits, and to follow patterns of activity in ways that were once thought to be impossible.

Given the sheer number of airplanes that are in transit at any given time and the unpredictable movements of both individual birds and flocks, it’s fair to say that avoiding bird strikes is an issue that is likely to always be with us. As a result of this, the effectiveness of Scarecrow’s products is something we should all be grateful for, including global aviation authorities, airport managers and of course the travelling public.