The thoughts and prayers of all at Scarecrow go out to everybody impacted by the Coronavirus (COVID-19) outbreak. These are globally unprecedented times in modern history – borders closed, cities and countries on lockdown, and travel, both national and international, severely restricted.

The aviation industry has, along with other sectors, been hit hard. Airport and airline operators are having to make very tough decisions within their respective businesses, to ensure they are in the best place possible when things do return to a sense of normality.

So with flights cancelled globally, airports have become desolate locations, as shown in these major airport images recently captured in Switzerland, America and Thailand. 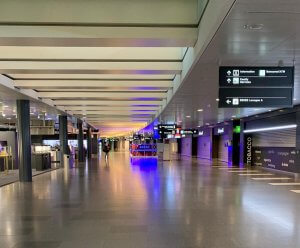 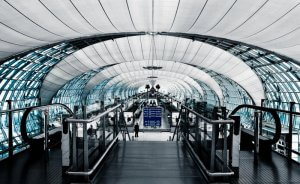 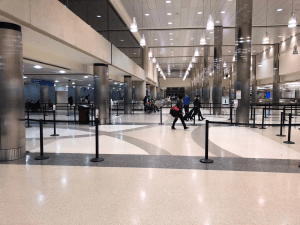 Whilst airports may currently be desolate of humans, the same cannot necessarily be said for wildlife; particularly where the reduction in flight activity may be making aerodromes even more attractive to birds.

In full respect of any tough decisions that may be taken by aerodrome operators, Scarecrow considered it may still be appropriate to give the matter of the wildlife at airports during these times further thought, and questioned two aviation experts, with significant experience in this sector; our thanks goes to both parties for their time and contribution to this article.

Mark Turner of MJ Airport Associates Ltd is a professionally accredited trainer and assessor, whose 20+ year career has been dedicated to work within the aerodrome safety and operations sector, incorporating the field of wildlife hazard control, at airports around the world.

An Associate Member of the AOA and ASET; his learning credentials satisfy both ICAO and EASA criteria.

Jeremy Nicholson, Bird Control Ireland Limited, is a wildlife management specialist, not only undertaking audits and training for airport operators, but also assessing airport safety matters in regards to wildlife for a major airline.

With approaching some 30 years working in this specialist area of the aviation sector, Jeremy is well known and highly respected.

Q/How necessary is it to continue daily Wildlife Control and Patrols at airports during these current times, and what would be the likely impact of failing to do so?

MT: It’s absolutely vital, to make sure the aerodrome remains less attractive to the birds – both passive and active measures should continue.

Any certificated aerodrome really must continue to assess wildlife on and around the airfield to continue to meet certification requirements. There should be ongoing recording of wildlife numbers, movements and patterns, and that data should continue to be monitored and assessed for trends and changes in habit that may have an impact on the wildlife strike risk and WHMP.

JN: The principle of good bird control is to dominate the ground by being present – an abandoned airfield is left wide open to the birds. Some species will find it quicker than others. Keep in mind that many airports are close to large areas of population, and urban areas are now changing. In cases of lockdown, with lower presence of people, and restaurants, cafes etc closed, a normal easy food source for birds has almost certainly diminished – no people, no food waste. Birds will be foraging further afield, and the wide-open spaces that are airfields will look very attractive.

MT: In the short term any lack of, or reduction in, normal operational routine is likely to result in increased wildlife activity, with the risk of roosting and nesting likely to increase. Some species are territorial, and will quickly see the new space as a safe and secure location – their habits will likely change as a consequence.

Longer term, it is very likely to require more time, effort and money to return matters to how they were; the effort required will vary, as every airport will have its own circumstances .The current lack of human activity at airports may result in the generation of less food waster, although this could become an issue as travel resumes; if more birds have, by this time, already taken a liking to the habitat of the airfield, then it’s attractiveness may still further increase more food sources return.

JN: I agree new habits may evolve – with the changes in the urban environment this is more likely, and it is distinctly possible that you will then start seeing birds developing a loyalty to the new site quite quickly. I really would advocate maintaining all existing programmes and continuing to gather and review intelligence to pick up on changing numbers, species, and habits.

The rate with which matters could deteriorate will be dependent on the very unique environment at each and every airport. Certain species will certainly enjoy finding what they perceive to be a new , safe location, which is also a potential replacement food source. One thing for sure is that it would take a real concerted effort to return matters to normal.

JN: This may be different based on location and environment, but Corvids are in many locations, and they would typically discover the airfield pretty quickly, if not already known.

Consideration should also be given to the time of year we are in – there will be young birds hatching over the coming months, and not only will they be lacking in experience, but their evolving flight and evasive skills will mean that they are more likely to be involved in birdstrikes . So allowing birds to settle/nest/develop site loyalty now, could easily result in more significant problems in the months ahead, as those young birds in numbers would represent an increased risk of bird strike.

MT: This will vary on species, characteristics and location – but it could be fairly quick. There is also the possible implications of the migratory season(s). Whilst many species have typically followed similar migration routes over time, observations should certainly be undertaken to ensure there are no changes in habit as a result of an aerodrome now having significantly reduced aircraft movements and reduced wildlife control measures.

There is also the question of habitat management, and the length of grass could become an issue of increasing attractiveness; which may include smaller mammals, which in turn may lead to a presence of much larger birds.

Q/So which would be more important to maintain – wildlife control or habitat management if operational capability is reduced for any reason?

MT: In an ideal world it is really a case of keeping both going. Regulations highlight the need to “deter and monitor” and any scaling back now on wildlife control would only probably create the need for a greater investment in deterrents and monitoring later.

And letting the habitat go would equally create a larger problem, as the habitat will quickly become more of an attraction. From first hand observations, I can say this can take many years to address and can lead to many years of increased wildlife strikes.

JN: I agree – keep both going. If, for whatever reason, budget or operational capability is under pressure, then still do both at a reduced level.

It is vital to keep the grass healthy, and to prevent things like thatch build up and increased insect activity. The obvious risk of leaving the grass with no management is it becomes much more attractive to a wider range of wildlife, not just the birds.

If there had to be something to give, maybe leave bottoming out, but keep the topping going.

And still do wildlife control – if the frequency of patrol reduces, then each patrol needs to be really effective; it will just become a much bigger problem in due course if the birds become “comfortable”.

Q/What would be your key message to an airport operations team at this time?

MT: To ensure proficiency is maintained and duties are performed as normal. Do not abandon the role, and lose the good habits – there is an important reason why these tasks are performed; and with the increasing “claim culture” you need to do what is necessary to mitigate potential future problems. The current downturn in aircraft movements comes in the European nesting season. Birds will sometimes seek nesting opportunities in unused/redundant aircraft, aircraft ground-servicing equipment and even vehicles – indeed, such occurrences have already been reported to me.  Right now and throughout this quiet operational period I would strongly encourage wildlife hazard control teams to inspect idle aircraft, equipment and vehicles to check for any evidence of nesting and to record such actions.

JN: Be brave, and fight for your bird control. Keep the airport safe now, to be in the best place when flight activity resumes. Remember, it’s your space, and not the birds. You do not want a long battle to regain control.