Scarecrow Group’s project for the USA (https://www.scarecrow.eu/other-scarecrow-news-2018/), was born from a meeting between Scarecrow Director David Randell, and Sanford’s Executive Vice President, George Speake. The result is that Sanford took delivery of their Scarecrow BIRD Tab Reporting Software system, and training was delivered on site in August 2018.

Brad Welbourn, the airports main wildlife operator, received training on a “Train the trainer” basis. Brad found the data logging software very easy to use, and in no time was happily using the system without the need for guidance; he was impressed by the ease of use and the time that would be saved from the airports existing processes which could be re-deployed to spending more time on airport safety.

As for reporting and analysis, the software options with Scarecrow’s system provides a massive step forward from their existing data logging system, so much so that even at this very early stage the airport are now looking into migrating their existing data into the Scarecrow system.

Images below from Sanford show Brad Welbourn undertaking duties whilst out on patrol, and logging data from those actions. 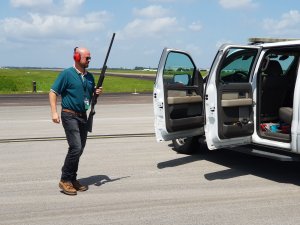 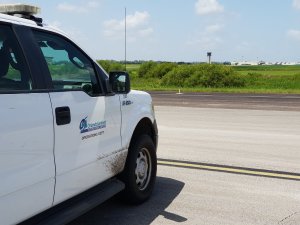 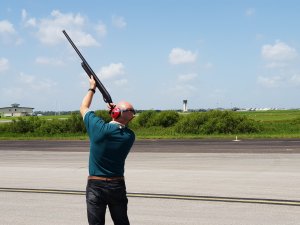 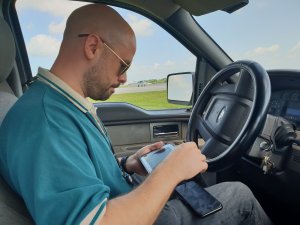 “As part of the Scarecrow Group project for the USA (https://www.scarecrow.eu/other-scarecrow-news-2018/), Daytona Beach took delivery of their full Scarecrow BIRD Tab system in July 2018, and training was delivered on site in August 2018. Daytona Beach is the third busiest airport in Florida for aircraft movements and was delighted to be invited to be part of the project, forever seeking new ways to improve their bird strike risk.

Training was delivered to both Craig Walker and Phil Farmstrom on a “Train the Trainer” basis and both saw immediate benefits in how the use of the product would not only save time, but also improve bird strike risk; an unexpected benefit was how the software could enhance the use of their existing Lucity system.

When out on patrol, Craig was particularly impressed by how the scarecrow bird calls had an immediate impact on dispersing one of the airports major problem species, the Cattle Egret.” 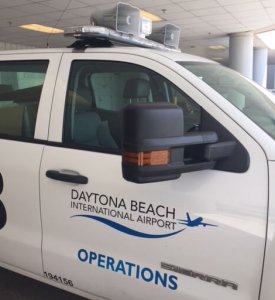 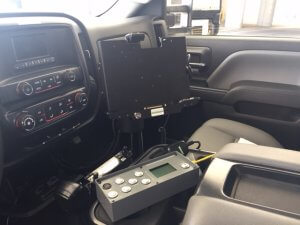 After Purchasing the original Scarecrow Data logging system, Ultima, in 2013 Burgas Airport were keen to upgrade to the latest Scarecrow BIRD TAB software to enhance their Wildlife Control Program.

Lee Travelled to Burgas Airport in May to provide the Wildlife Control staff with hands on training on the tablet software and also trained Operations Centre Head of Department, Konstantin Temenov, on analysing and generating reports from the collected data. A full data migration of their last 5 years data was also completed to ensure continuity of reporting and trend analysis.

All trained personnel were pleased with the ease of use of the new software and are looking forward to using it in the coming peak summer season. 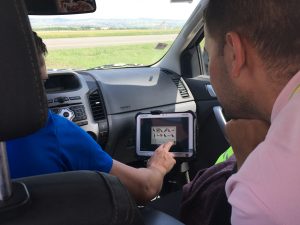 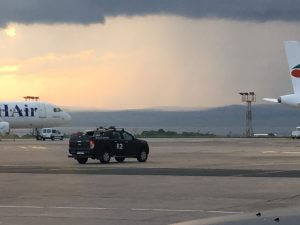 Having originally seen the Scarecrow BIRD tab product at the North American Bird Strike Conference (http://www.birdstrike.org/) held in Montreal, September 2015, the Environmental Coordinator for Luis Muñoz Marín International Airport, San Juan, Puerto Rico – Dannally Cruz – has been keen to secure the use of the Scarecrow system in her quest to further improve the already impressive wildlife control  / bird strike figures at the airport.

The airport now has the system having made the purchase in 2018, and Scarecrow have recently undertaken their normal on site training visit. Training was largely undertaken on a one to one basis, with Dannaly looking to then train others as required.

Dannaly is looking forward to being able to invest some of the time saved in no longer having the chore of logging and input of paper records, into improving the wildlife control safety at the airport even further through the better analysis and reporting options that the Scarecrow software brings.

Training went well, and already whilst on training patrol, Dannaly has seen how use of the Scarecrow distress calls have had a positive impact on dispersing one of their key risk birds, the Egret.

Unfortunately, it is not just the birds the occasionally cause issues at San Juan, as the images below show!

Following the upgrade of software by the Royal Netherlands Air Force, Scarecrow have delivered training in the use of Scarecrow BIRD Tab, to key military personnel responsible for wildlife control across all their air bases.

Having used Scarecrow software since 2010, staff were fairly familiar with the concept of how distress calls are used for dispersing birds, and also the data logging and grasped all the new features contained within the new software  fairly quickly; training was delivered in two separate groups over 2 days at Deelan Airbase, now a Commando Helicopter training facility.

The Deelan Airfield was used, and significantly expanded, by the Luftwaffe in World War II, and after the war the site was initially used as a storage facility.

There is a Deelan Airbase Museum http://www.museumvlbdeelen.nl/ displaying various memorabilia following the period of time when the base was used for storage, although there are some samples of World war II equipment also on display within the airbase itself, as shown in one of the photo’s below. The second photo shows some of the attendees during training as they work on various exercises during a break out session. 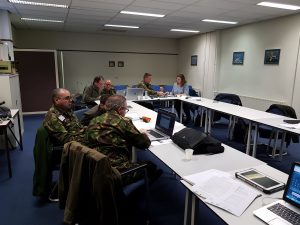 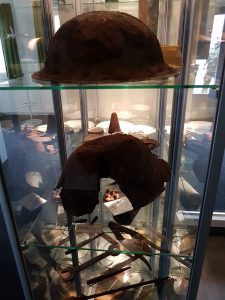 Riga International Airport, Latvia have been longstanding clients of Scarecrow, using our bird distress calls as a dispersal method for their problem species for over 13 years.

They were one of the first airports to purchase the original Scarecrow data logging system back in 2009, and happy with the product and support received from Scarecrow, have continued to update the products along the way resulting in the last upgrade to the Scarecrow BIRD Tab system. The original bird call product purchased in 2005 still works well, and which can also now be used in conjunction with Scarecrow BIRD Tab given the flexibility BIRD Tab provides – an added benefit of updating to the latest data logging system is the airport now have a complete contingency for their Wildlife Control. All the airports historic data has been successfully migrated into the new software system. 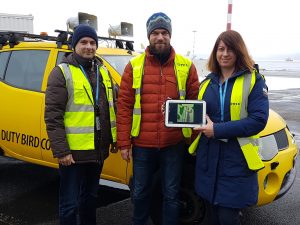 Scarecrow have undertaken a site review meeting following the purchase of a Scarecrow BIRD Tab System by U-tapao Airport, Thailand, used for dispersing birds and data collection regarding wildlife control.

The system has been installed and in use now for about one month, and the Wildlife team are really embracing the collection of good data, which is vital for analysis purposes so that the correct risk mitigation actions can be taken.