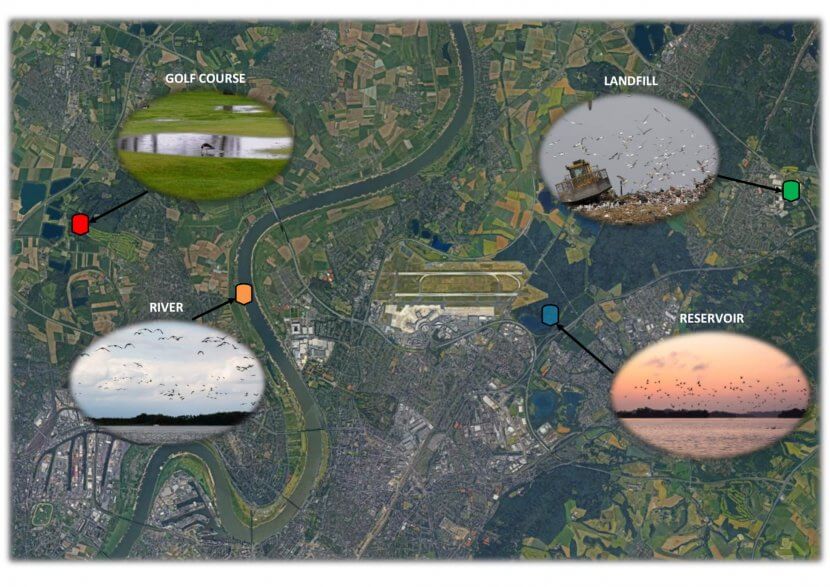 To those who don’t work airside in the world’s airports, the whole process of planes landing and taking off may seem somewhat uncomplicated. Runways are busy throughout the day, and as long as traffic management is handled correctly then operations can run smoothly day in, day out, right? Well, a little bit yes and a whole lot no. As is so often the case, if you take a closer look everything can appear to be so much more complicated than you might have realised.

One of the most important factors in ensuring the safety of every passenger and every member of the air crew is the provision and maintenance of a practical and successful wildlife hazard management plan (WHMP). Ask anyone who works in this field, in just about any aerodrome or airport in the world, and you’ll soon find out that complexity is just another part of the job. So much goes on behind the scenes these days to ensure wildlife strike risk is assessed and minimised.

The threat that birds in particular and wildlife in general can have on a plane is well-known, of course, but what many outsiders won’t realise is that there’s far more to this than simply scaring birds away. After all, if a flock of geese is humanely dispersed from a specific area of the airport, it will only go somewhere else. Clearly, we are yet to reach an age in which we can dictate where the birds actually travel to as and when we deem it necessary.

It’s therefore imperative that steps are taken to control as much movement and activity as possible, and that can involve actions well away from the airports themselves. For example, if an airport is close to a landfill site, there will be a greater number of birds in the local vicinity. In the majority of cases, the birds that are mostly attracted to landfills are large birds such as seagulls, but many facilities also have to deal with large numbers of ravens, crows, magpies and more.

Clearly, the organisations that manage landfill sites are keen to reduce the number of birds that congregate in the area, but if these locations are close to airports a great deal of care is needed to ensure flight safety. The problems caused by the proximity of a landfill site are double-edged, because the accumulation of rubbish will attract the birds in the first place, and various areas of standing water will also prove to be something of a magnet.

As a general rule, airport wildlife management covers an area far wider than the perimeters of the airports themselves, usually a circle of some 13 kilometres in circumference. The implementation of effective bird deterrent controls is crucial to avoid damage to aircraft throughout this area, in order to assess the actual strike risk and of course to take steps to minimise dangers. Identifying the multiple bird species that represent the largest threat is therefore a must.

One of the key factors in a successful WHMP is the need to communicate with outside bodies. In addition to landfill site managers, airport authorities and civil aviation governing bodies will often liaise with local government representatives in a bid to prevent birds nesting in empty buildings close to their facilities. There will also be occasions when airport managers will attempt to encourage local land-owners to adopt improved bird dispersal initiatives.

Always collaborating with the people who matter

Another common area of collusion will often be with local farmers, in part because cropping patterns will inevitably have an influence on bird numbers within the vicinity. Birds will of course forage for food sources on farmland, especially when the soil has been disturbed for ploughing or harvesting. Knowing when these events are likely to happen locally can help airport managers to take steps aimed at reducing the risk of bird strikes on planes.

Areas of open water will always attract birds, and these can include the likes of standing water that has resulted from practice sessions for airport fire services. New construction sites operating close to airports will also often produce areas of standing water, as will sustained periods of inclement weather, of course. Needless to say, aerodromes that are close to the sea will also have to deal with a wider range of bird species than those located further inland.

It’s almost impossible to remove birds and other species from airports, but understanding what can bring them to the location is crucial. Equally important is the constant monitoring of all activities and movements, in order to build a greater understanding of their patterns. Scarecrow’s impressive B.I.R.D. Tab performs two hugely important functions: effective bird dispersal and powerful logging and analysis processes.

As is so often the case, the more we know, the more we can ascertain what needs to be done. Understanding why birds congregate at certain times and in specific locations gives us the opportunity to do something about the potential dangers. And with Scarecrow’s help, it’s easier than ever before to monitor and record information that really can save lives.